Thursday –
John Herr (riding shotgun) and I roll into the Misty Mtn Campground around 5:30pm and start unloading the most stuff I have ever jammed into my Jeep for a trip. It was a wee bit windy so setting up camp took some effort. Just as we finished and the sun went down Tom Quigley rolled in, which was good timing since he had the firewood and it was getting cold. We got camp setup, cooked up some dinner, and got a campfire going. Did I mention that it was breezy? With a steady 20+mph wind and gusts reaching 60mph the near freezing temps had quite a wind-chill factor. We attempted a windbreak for the fire and huddled around it for awhile before turning in for the night. About 5:30 in the morning and after zero shut eye due to the incredible wind our rain-fly half blew off and we had to re-stake it, needless to say not one of the three of us got much of any sleep that night.

Friday –
We got up to cold temps, can’t say woke up because we didn’t sleep and there was still a strong steady wind when we headed over to the trails. We met up with about 15 NCTTORA folks along with Doug Johnson who had driven up that morning, everyone signed their life away and Chris the owner of Crozet led us out onto the trail system. One of the nice things about Crozet is that at almost every tough obstacle in the trail there is a bypass or alternative trail section to take so you can have different level rigs and drivers out on the same ride. The morning was pretty uneventful as we snaked our way throughout the trail system although I believe one of the Toys broke a Birfield right about at lunchtime. The afternoon provided more good trail riding with a few minor mishaps along the way (dented sheet metal, some backed out driveshaft bolts, another Birfield). The trail riding day ended with a few guys attempting the obstacle known as “Body Shop”. Woody went first in his buggy being spotted by the owner Chris and showed everybody the way it was done by going through and coming back unscathed. Greg “Big Waylon” was up next in his modified TJ and got to experience the reason behind the name of this obstacle. It is made up of two large rocks forming somewhat of a V-notch which you straddle but if you get off the proper line by a few inches you’ll slide into the notch on your side and that’s when the Body Shop goes to work on the sheet metal. Even after taking some abuse on his drivers side Greg turned around and came back through to make sure the passenger side matched. Another NCTTORA guy I believe his name is Ron aka “Dawg” also went through and ended on his side but with an exo-cage didn’t suffer much more then minor trail pin striping. The last bit of excitement of the day was Woody attempting about a 8ft climb up a large rock, this is where he learned about wanting to seal off his fluids a bit more to prevent them from going dry while he was on his lid. It was a good show but that would have been a crazy climb and I got to break in the new winch rope by putting him back onto all four. We called it a day and headed back to camp where we found both Steve Fischer and Jeff White as they were setting up camp. We again cooked dinner (man those steaks tasted good) and due to the fact that the wind had calmed down some we were able to sit around and enjoy the campfire into the evening as the temps once again dropped.

Saturday –
We headed to the trail system around 9:30, John riding shotgun in my Jeep, Doug riding shotgun with Jeff, and Tom riding shotgun with Steve. When we got to the trail system the rest of the guys were just heading out but the line of trucks had grown to over 20 rigs. Just as we were going to join in at the tail of that long line Greg Waylon and John Stevenson (who we had wheeled with all day Friday) showed up and after a quick discussion decided that our 5 rigs would head out separately. This day the wind had finally gone away and the temps creped up near 60 with the sun shinning we had a great day of trail riding. At one short technical hill climb named “Pete’s Demise” four of us had climbed it leaving only Greg at the bottom. He decided to put on quite a show and opposite of the rest of us who crawled it Greg dumped it into third and put the hammer down for an exciting romp up the hill. Unfortunately the end result was a front trackbar that looked like a pretzel and limited his turning ability to the drivers side which put Greg on his trailer soon after. With such a small group we covered a lot of ground this day and took some pretty technical trails and personally I just had a blast. Near the end of the day Steve ripped off a rear shock mount so he and John headed back to the owners house which is on-site right next to the open field used for camping to see about borrowing a welder to re-attach it. Then with the day winding down the old “one more try” got the better of one of my tires as I sliced a sidewall attempting a muddy climb sending me back to the main field as well to swap it out and we called it a day. Back at the main field everybody was gathering back up from the days wheeling and I couldn’t help but noticed that Shawn Groce’s rig had a new dent, his roofed was caved in from a roll. There is suppose to be a video of it but I haven’t seen it posted yet. While Steve and John waited to use the welder the rest of us headed back to camp and grabbed a hot shower and started the campfire. Finally just before 8 they got back to camp all fixed up and we decided to head into town for a relaxing dinner in a warm atmoshpere. After driving for 35 minutes only to end up at a Ruby Tuesday’s that was 10 minutes away (don’t ask) we enjoyed a relaxed dinner over story telling from the trail rides. Throughout dinner we overheard multiple individuals talking about the incoming wintery mix storm that was suppose to hit after midnight and bring with it possible freezing rain and snow. So on the way back to camp John and I decided we had had enough of the weather from the previous nights so we packed it up and headed for home a little after 11pm. The roads were pretty deserted so we made good time and I was home at 2:30 and asleep by 2:35. I heard that there was some rain and a bit of snow the next day but nothing too major and the rest of the guys got home safe on Sunday.

All in all a really good trip of wheeling although I’ve learned that I’m not much of a winter camper. Crozet is a place you can have a lot of fun regardless of the vehicle you drive and I will definitely be going back again although during the warmer months.

Everyone’s rig did really well and I think Tom was the only one to escape unscathed although I’m sure he undercarriage might disagree.

Jeff “Ebony” White’s TJ – some minor damage to both passenger side flares and some good use of his armor all the way around.

My TJ – tweaked rear tailgate, tweaked rear bumper, a sliced sidewall, and some touchup needed on just about every skid plate.

Doug Johnson was our honorary photographer for the weekend so hopefully he will have some pics/vids for our viewing pleasure. 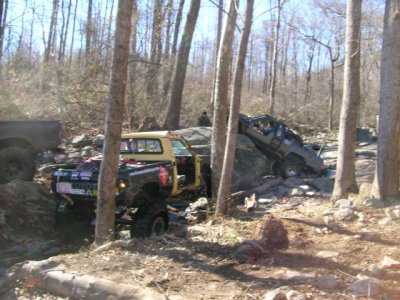 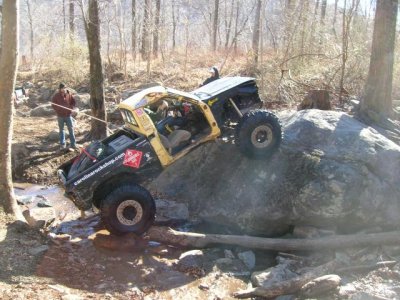 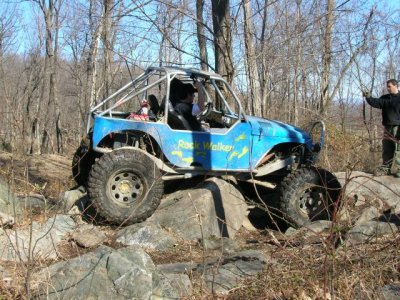 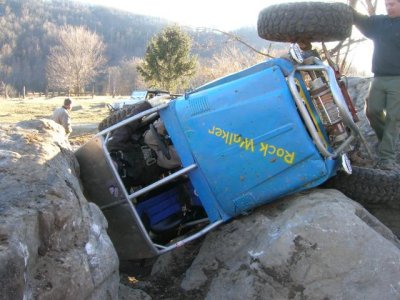 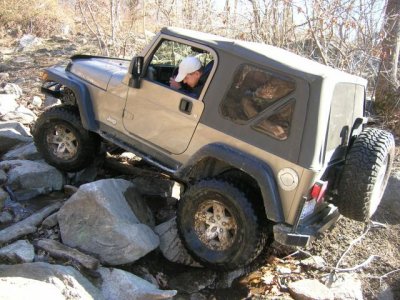 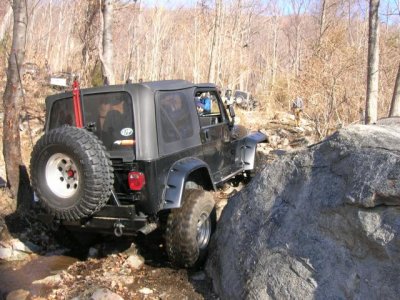 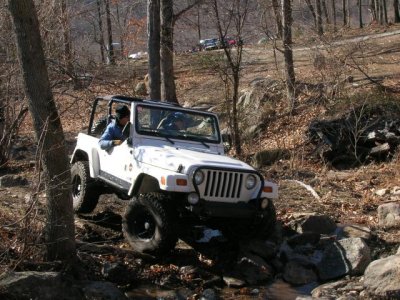 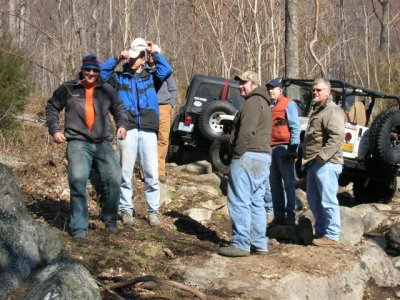