This past Easter weekend was the CNC 4×4 spring trip to Mtn. City, TN. All total there were 8 vehicles present, 4 riding on Friday March 25th, and 4 more joining the fun on Saturday March 26th. Accommodations were set up at the Mountain Empire Motel, located right in town and I had a chance to talk with the owner who commented on the fact that much of his business is from off roaders and ATV’ers. I asked if he thought that was cool and he said yes, that previously only fishing was what Mtn. City was known for. Hardy souls up for this ride in no particular order were, Greg Mattern with wife Sandy and two boys, Seth and Reece, Craig Scibetta (pronounced SHBETTA, I got it now), Bruce and Chris in the fabbed west coast Toyota, and myself with my parents (1st timers). Some of arrived at the motel Thursday night with Craig Sshhbetta meeting us Friday am after leaving Raleigh at 5:30 am. We joined up at the Appco/Burger King (come and get it) at 9am and headed out to the Cracker’s Neck side at 9:15 am. It was determined that my Mom would ride with and my Dad would ride with Craig. After airing down and swapping the mandatory “What did you do to your jeep this winter” questions we found out the story on Chris’ fabulous fabbed Toyota. It seems our guy Chris took a week off work in January and drove out to Moab, Utah to see in person and test drive this mid 80’s Toyota PU with coil springs, 38.5″ Swampers, dual transfer cases, exo skeleton and tube frame bed. It was awesome! Other that than a fuel line issue early on it performed flawlessly except for driver error (nice line in the Waterfall Chris!).

We warmed up on the Playstation 1 and 2 Rockgardens where my Mom commented “There has to be an easier way than this Michael!” And when Greg asked here what she thought she replied “I’m going to need some Tylenol!”. From Playstation 1 and 2 we were off to the Waterfall trail where I promised my Mom no more Rockgardens. We traveled on down to a particular wet section (much of the trail is in a creek) where I asked Greg over the CB if he remembered this part. He said no so I reminded him that this was where he let his 6 yr. old Seth drive last fall. Needless to say that sit to well with his wife Sandy. At the big rockgarden I went left to the guys try their luck on some biggg rocks. Chris and Bruce did well and should have, since that Toy was built for the rocks. Greg and his veteran driving skills showed how it was done. And Craig, well let’s just say the Rubicon needs more clearance. I waited at the top of the hill where Sandy, my Mom Alice, the two boys and I waited. Reece kept us entertained by knocking down a dead tree right on top on my almost new roof. I guess he didn’t think dead wood was supposed to bend that way? My intention was to get everyone up to the lunch spot at the cellular tower since the weather was great (65 and sunny) but our path was blocked by a rather large tree (we really could have used you Carl). We spent about an hour and many calories trying to chop at it with 2 hatchets and my winch line but to no avail. I learned that trees petrify from the middle out making it seem easy at first then progressively harder. We headed back down the mountain to try our luck on the Big Wheel trail, famous for the Hill of a 1000 marbles obstacle. Again, we couldn’t have asked for better conditions as we made our through the trail smoothly getting to the bottom of the 1000 Marble obstacle. I went left again (remember my promise to my Mom) and let everyone get a shot. Chris and Bruce went first and got through impressively in like 5 minutes. Greg went next and got through with a little stoppage and bumping and grinding. And Craig, well Craig’s Rubi needs more clearance and maybe a better spotter than my Dad (1st timer). He lost a bead on his right front tire (damn MTR’s). Thanks to my trusty Hi lift and a convenient tree to lean the Rubi up against the tire was changed in no time.

Dinner was at the Daniel Boone Inn in Boone, NC where we met the rest of the group around 7:30pm. They consisted of Sean and Zach in the smoking beater Toyota, Scott Roberts in a TJ, Mike Care in a 4 Runner, and John Herr in his Cherokee, finally getting a chance to drive it off road and thanks to Keith Douglas, some 32 inch BFG MT’s to ride on. Dinner was terrific as usual and if you get the chance to dine there, you won’t be sorry. For the first time in like 9 years the price went up a whole dollar to $13.95 for family style country cooking. What a bargain!

On Saturday we all left the motel just after nine for the short trip to the Callantee side. This is the harder side of the two off road areas and made for some great trail riding. My folks skipped out on this to do some tourist things in Boone and Blowing Rock. Thanks again Craig for letting my Dad ride with you, I’m sure he asked you a million questions, it’s the retired civil engineer in him!

We hit the Welder trail first and stopped short of the waterfall obstacle to let everyone catch up and get out for pics and such. I wish my Mom had seen this one, I’m sure she would have been amazed. I went up first and managed to stick it on my second try, my first being too far to the right. Greg and Sandy followed after letting out the boys and I think he scared her by taking it too far to the right also and having to back down ( I saw the look in your eyes Sandy!). Being right puts the vehicle in the path of the rushing water and doesn’t give you much traction. I kept the boys entertained while everyone else gave it their best by picking up all the trash that was around that area. It wasn’t but a bag full but I would just like to stay on good terms with the man who owns the place, Mr. Brown. Chris made it interesting by taking a high left line over the pivot rock and proceeding to rock rash his huge driveshaft. Mike Care actually broke the rear passenger side window of his hardtop against the rock wall early on in obstacle before the waterfall. Ouch! Should have rode with the softop!

After clearing another blocking tree at the end of Welder we headed on to Little Tellico. This is a short, rocky really technical trail that gave us all sorts of fits last fall. There is of course a creek running don at you and a large table rock right in the middle of the trail. The line used to be to place your driver’s side tires on there and throttle over. But it is now really washed out all around it and there is a pretty clear line on the left side bank, placing your passenger side tires on the table rock. Everyone got through nicely except for Mike Care, who had to back down and try again. He claims it was a longer wheelbase thing that swung his back end around and put him in a sticky situation the first time. Right Mike, whatever you say.

After Little Tellico Greg and family split up from the group as they had church commitments to get back to and we went up to the vertical trail. This is allot like the Dutch John hill climb at Uhwharrie but times 3 and much steeper with the 3rd climb being the easiest. We picked up 2 more Toys from NC that followed us up the trail. After the initial entrance to the trail there is a little soft slick spot at the bottom of the first climb that John Herr in the open rear XJ had trouble clearing. I think he was winched up but I’m not sure as I was way up ahead. This is not a trail where you can stop and park on an incline, it’s that steep. In fact, Mike Care and I were clearing yet another tree where he noticed in no uncertain terms that my jeep was rolling backwards an inch at a time. He got in and held it till I came over and moved up to more level spot and blocked the tires. I think I’m borrow your idea Greg about a wheel chock tethered to a rope next time. Other than some custom pinstriping courtesy of Callantee vegetation we finished the trail on time, aired up and left for home. Lately, I seem to be damaging things on the last few wheeling trips like both fender flares, my tailgate, my radiator and front bumper, stuff like that, but my only thing was my exhaust (again) pipe coming loose from where it bolts to the manifold (really common with the 2.5L engines). Great weather, good folks, and good food made for an awesome weekend! See you next time. 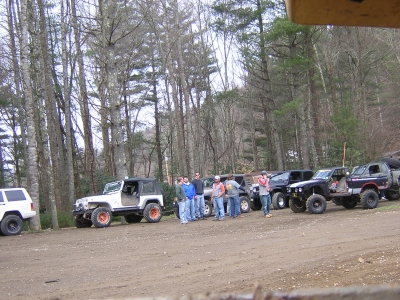 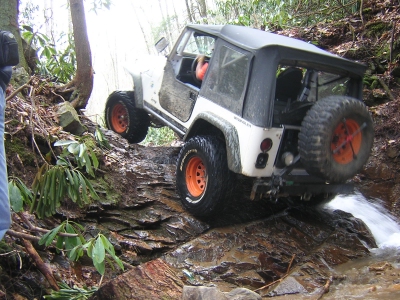 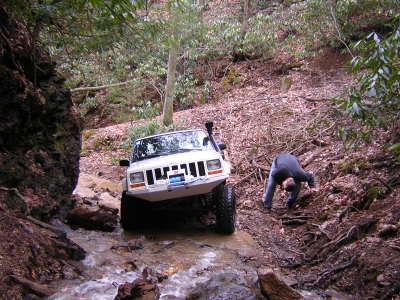 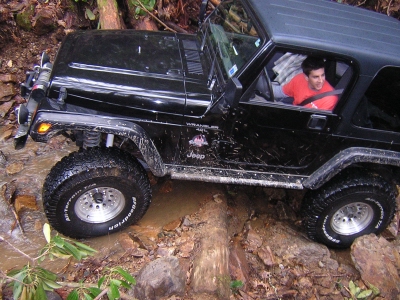 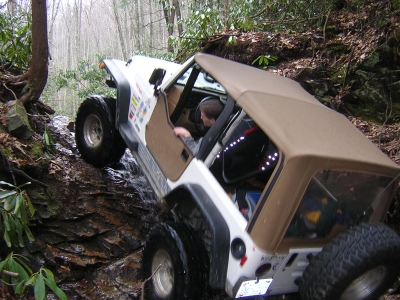 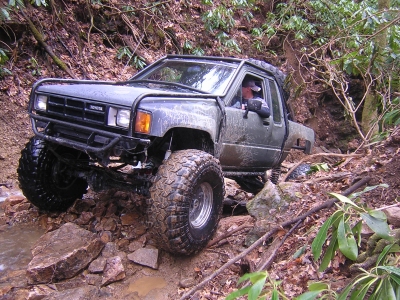 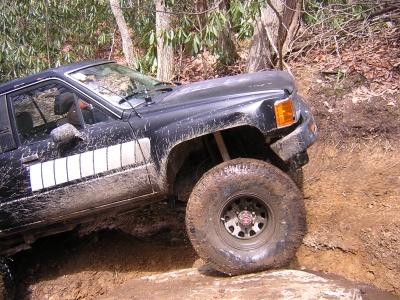 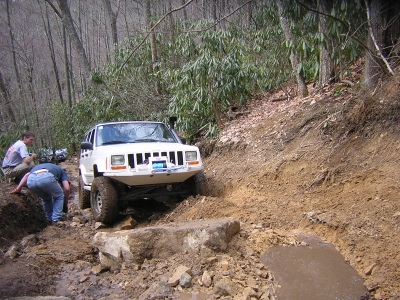 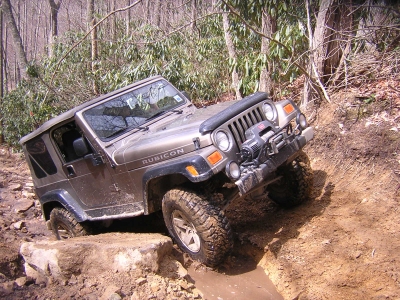 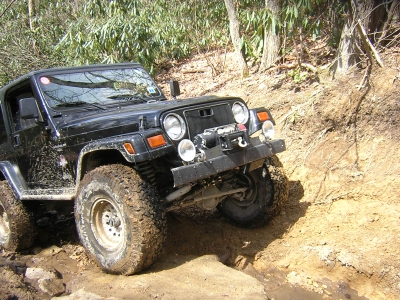 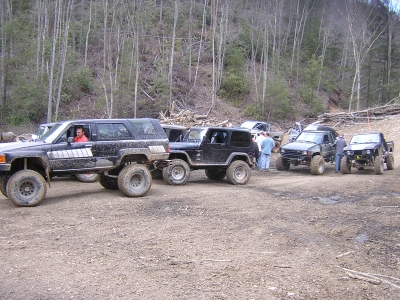