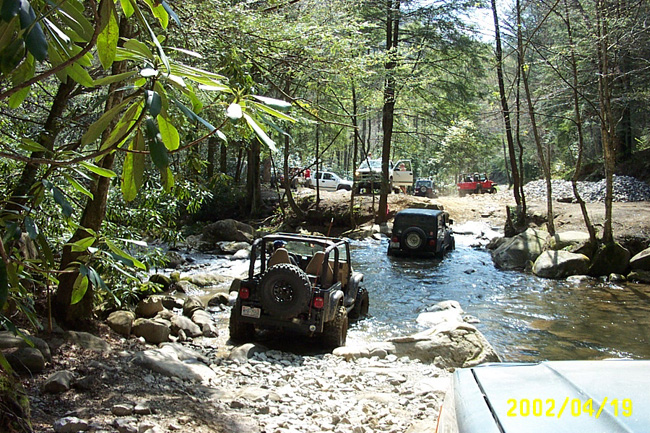 Well my plan was to leave at 2pm Thursday, but had a
few problems and delay’s so we ended up leaving at 6pm from
Raleigh, which put us getting to the cabins at 1am.

When Jess and myself arrived Don, John, Scott, and Todd were already at the cabins and a sleep.
We all stayed at Pine Creek Cabins.

We woke up around 7am and started to get all the Jeeps ready for the day, at around 9am we headed out to the trail head after filling up with gas and a little food.

We left the pay post at about 9:45am to make are way up trail 1 to the water crossing on trail 5 (where Ken bent his tail pipe around his rear axle, so we stopped and he cut it off and then we all decided since it was around 11:45am to just eat lunch at the water crossing) and then off we went up to slickrock.

When we got to Slickrock we met up with Phil from Canada and Dave from Georgia.

They were waiting to see us all try the rock.

Well Scott was first and did very well for having BGF A/T’s on his TJ, but in the end he and everyone else had to use a winch on the lower part of the trail and the upper part except for John, who was the only one to make it up Slickrock with out the assistance of a winch.

Even though the guy behind our group drove up slickrock like he
was driving down a paved road, we all still had fun attempting the rock.

After slickrock we headed up the rest of the trail which was very challenging and then looped around to go up upper 2.

That is where my body damage took place which you can see in the
pics linked below.

Well John and Don were the first to try and made it up upper 2 with no problem, and then Scott started to try it but decided to pull his winch so he would not destroy his hard top. Then I decided I would try it without assistance and now I know why Scott pulled the winch (oh well just a little body damage).

After trail 2 it was around 6pm so we all decided to head back to camp and take some showers and head out to dinner.

Well on the way back my Jeep started to sputter and buck so I
stopped and after a little investigation I realized the reason
was because I had a straight through after market muffler and
there was not enough back pressure in the exhaust so the
computer changed the settings.

So I limped the jeep back to camp and straightened the tail pipe
and welded it back on and then reset the computer and all was
fine.

Well the next morning turned out to be even more fun.

As I was heading up to the trail head to meet Don, John, Rick (Bionic Marshmallow), and Gerald “Hootus” Jarrett the two bolts that hold my cross member broke off and one side of my transmission plate fell about 8″ down.

So I ended up strapping it back up with some ratchet straps
attached to my rock rails and limping the jeep back to camp
where I ended up welding the crossmember to the frame rail and
putting the straps back on just for safety so I could get home. Which also meant I was down and out for day 2.

So here is the story I received from John and Don

Don, Scott, and I convinced Rick and Gerald that Schoolbus was their destiny so off we went.

Gerald’s Eddie Bauer edition Exploder looks bone stock. It’s actually sporting 33″ ATs and a rear locker but it doesn’t look like it. You should have seen the reactions from bystanders when that one came up the trail.

Schoolbus was a lot of fun. Lucky for us it was bone dry.

About 100 yards from the end of the trail, Scott Roberts’ TJ decided to snap a trackbar. Go Teraflex!

We ate lunch at Helicopter pad while waiting for somebody to come up and show us how it was done.

Well Finally a 65 year old man on a dirt bike went straight up the bare rock face of the pad. Not the line near rainbow rock that 4wd vehicles take, the vertical face! Amazing thing to see. He sat at the base looking at it for about 5 minutes with his engine off. Just looking..then Fired up the bike and drove straight up!

We got reports from other dirt bikers that there was a broken Toyota on Guardrail that wouldn’t winch out of the way. So nobody was on their way to the pad to provide the lunchtime show.

While waiting there a CJ and a Dodge Ramcharger on 40s caught up with us. The Ramcharger attempted helicopter pad. Probably would have made it but his xfercase slipped into neutral. He thought it was a transmission problem so he winched. Pretty embarrassing for him.

Big decision at this point was which way to go from there. The squeeze on Trail 11 looked worse than last time I was up there and the longer wheelbase vehicles’ drivers were concerned. Gerald played the guinea pig and it was obvious that longer vehicles weren’t going that route w/o major body damage. So we split up. Long rigs went back down Schoolbus, the wranglers, the CJ, and the Ramcharger went through the squeeze.

You may be wondering how that Ramcharger guy made it; if you saw the sides of his rig you would understand.

We went on over and ran Upper 2 again. We were hoping to see someone on Lower 2 but the place was surprisingly empty.

The exploder group went back down schoolbus w/o much trouble. Frank did break a front axle. (2nd hand report)

Turned out to be good timing as we came off Upper 2 onto trail 1 just as the explorers hit that point on trail 1.

Then it was off to dinner at the steak house and back to the cabin.

Some pics are in the link below.

Winches are your friend.
Do Tellico on a weekday so as to lessen the head-on traffic, which was not a major concern for us but very easily could have been.
Have a map with you.
Bring lunch AND dinner.
HOW TO GET THERE — Tellico is in Murphy, North Carolina.

DIFFICULTY — Tellico has a little of everything to throw at you from the mild to the wild. I have heard of many rollovers and a lot of carnage done to Jeeps on this trail. Be prepared for anything. 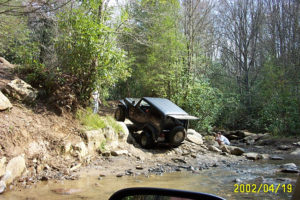 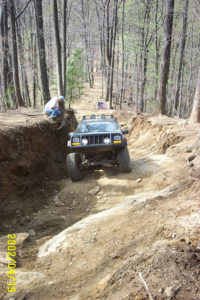 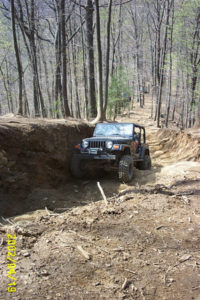 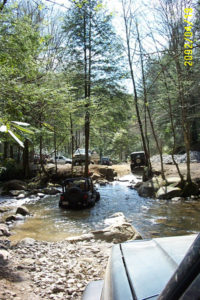 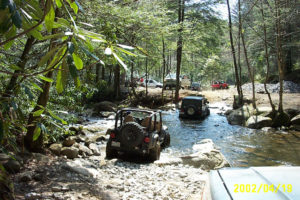 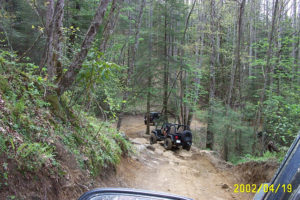 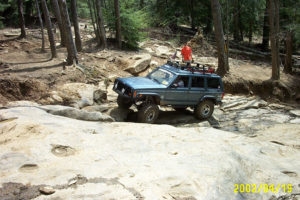 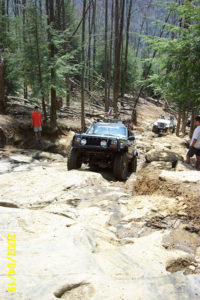 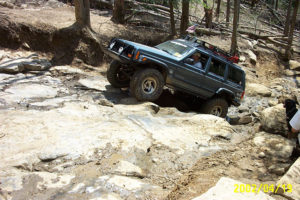 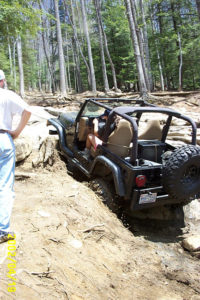 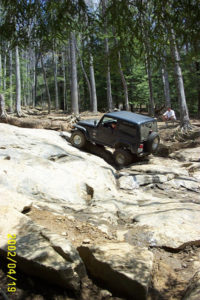