I led the CNC “stocker” group on the easy trails Saturday and didn’t have any problem – nothing hard enough to really test my new TSLs on my K5.
Jamie, our friend Jay, and our dog Addy rode with me. It was cool to have Bob in the M37 fire truck behind us on the trail – it is really nice and worked well. Was nice to have Jack (TJ) and Chuck (XJ) along with us, Doug Johnson (CJ-5) with daughter Annie in car seat, a STOCK Liberty, and Jon Leach in his TJ was tail gunner.

It was funny to see Annie asleep as the Jeep bounced over stuff. Doug – was that her first trail ride?

The Liberty made it through Wolf Den and down Falls Dam. She no problem with traction, but did hit the undercarriage on stuff several times. Holly (the driver) decided not to take it up Dickey Bell after that. Parked it and she and her husband rode up Dickey Bell with Jon Leach. I think this was a good decision, as the Liberty had NO TOW POINTS AT ALL. I’m glad we didn’t have to tug her off anything.

Holly and her husband left after Dickey Bell, and Bob headed back to camp – worn out from cranking the wheel on the M37 (no power steering). We then headed up Rocky Mount Loop away from Kodak (counterclockwise). Before we got to Sawmill, Jay got a phone call that his wife Meghann had arrived at camp, so we headed back to camp in the Blazer while Jack, Chuck, Doug, and Jon kept going.

Cool note – Jay towed down a 36-foot gooseneck horse trailer with living quarters and 2 ATVs in the back instead of their horses.

Had fun at the Games Saturday and the dinner was great! Thanks Ken, John Herr, Craig Scibetta, and whoever else helped with the Games and food. Folks have work to do to their rigs if anyone is going to beat Jeff White in the slow crawl or RTI competitions!

Saturday night after dinner we took Meghann and Jay in their Suburban, me and Jamie in the K5, and Craig Lewis and Shawna in in their 76 Chevy truck on a night run up Falls Dam. The Suburban did great – had never been on the trail since they have owned it. It is open/open and doesn’t flex that great (380 on the RTI ramp) because of the stiff 6-inch all-spring lift and front swaybar still connected, but it was fine. Falls Dam was the *one* trail they wanted to take that Burb on – on others it would likely have scraped the edge of the roof where rocks lean you towards trees. Jay is working on a Scout that will be his trail rig.

We hit harder trails on Sunday. It was Shawn (4Runner), Zack (TJ), Craig Lewis (Chevy truck), me (K5), and guests Meghann and Jay Moore on ATVs instead of their Suburban. Right when we hit Rocky Mount Loop from the double parking lot, Zack realized he had lost a front lower control arm bolt. Shawn replaced it with a 3/8-drive socket extenstion and duct taped in place so he could drive home. Hope you made it home with no problem Zack!

I dented the Blazer rocker panel on that rock ledge leading up to Kodak, but made it over fine – heard the tires just barely spin, then they caught and I drove over it.

At Kodak, I hope we have pics of Shawn getting his open/open, no flex, PINK 89 4Runner up on the big rock at the bottom – I can’t believe he pulled off.

Very cool! Good combination of driver skill, light weight, and a disregard for rolling the vehicle. 🙂 Craig made it almost onto that rock, but dented the T-case crossmember and warped his rear d-shaft. After getting strapped back off the rock he then made it up a line to the left with no problem. I then took the same line to the left that Craig took – I haven’t ever gone that way in my Blazer. It took a lot of spotting to get me over it – thanks Shawn and Craig! I had to keep backing up and trying to hit the right line, and my front limited-slip was not grabbing much, but the rear stayed locked. I had the TSLs spinning the sidewalls against the side of rocks, but they didn’t get hurt at all, so I’m glad I got them. Jamie has a video of some of that, but I don’t think it looks that cool in the video.

Shawn headed back to the parking lot after Kodak, and Jamie and I (and the ATVs) followed Craig to Sawmill, Slab Pile, and Dickey Bell. Somewhere in there I hit the passenger rear wheelwell on something and dented it a little. Not bad – we don’t know what it hit – didn’t know we had done it!

It dented the front edge of the wheel opening. Then I hit the driver rear corner on a tree – the same exact corner by the tail-light and bumper that I hit on the bank of the Dutch John hill climb last year. All of a sudden the rear kicked over and tagged the rear bumper right before I was past a tree. I wasn’t even doing anything hard – I definitely didn’t expect it.

After driving down the big hill on Dickey Bell, Jamie drove my K5 following Craig the rest of the way down to 553 with Meghann, and I got to ride Meghann’s ATV back up the trail. Was very cool to go faster and get to jump a bunch of those “water bar” hills in the trail!

Oh yeah – we saw a Dodge extended cab DUALLY on the trail! Like a 2004. It was lifted like 4-inches with 33-35 inch tires. I don’t see how it had fenders left on the back of it, but it didn’t look scratched up at all!
Crazy. I guess I need to learn how to drive if they can fit that through the trail, but I hit stuff with my K5.

We followed Craig Lewis and Shawna home after he swapped on his spare rear d-shaft. He pulled the RTI ramp. We stopped for dinner at Golden Corral on the way home. Craig Lewis eats a lot. Is it something about the name Craig? 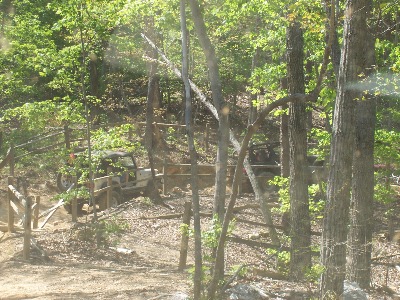 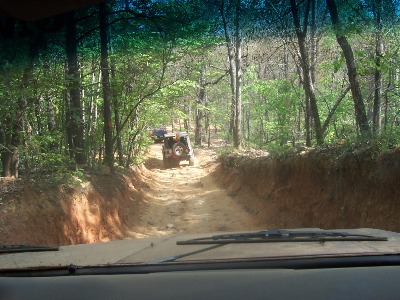 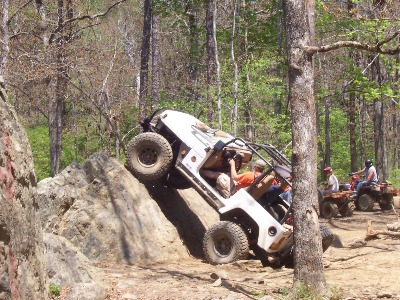 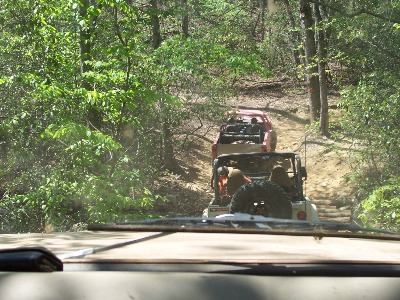 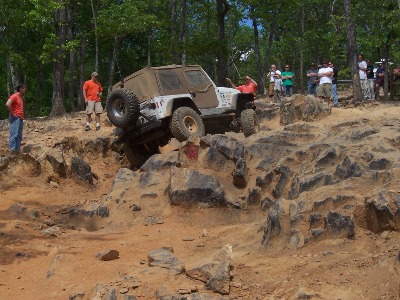 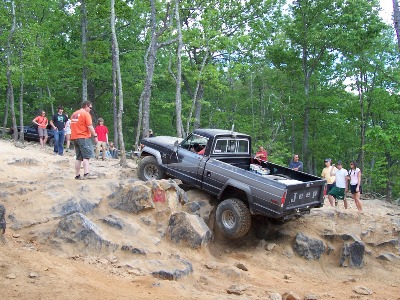 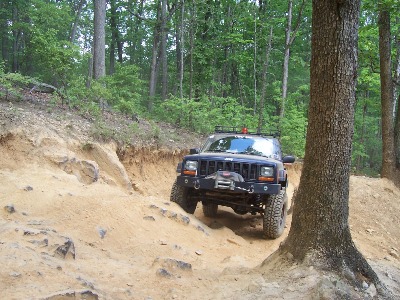 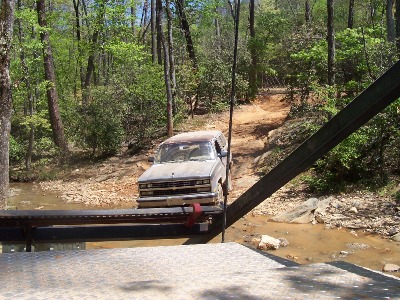 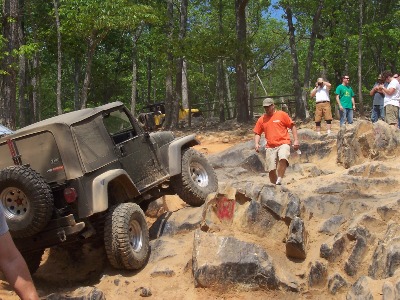 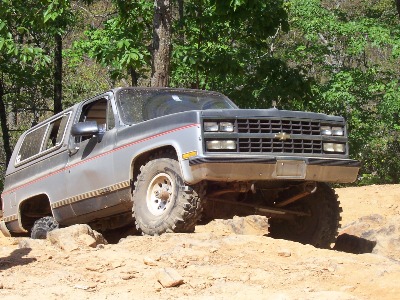 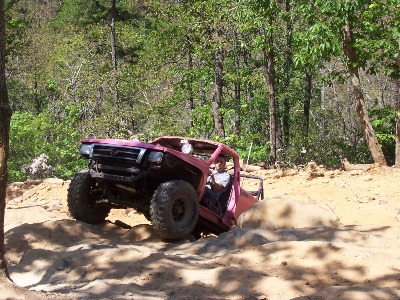 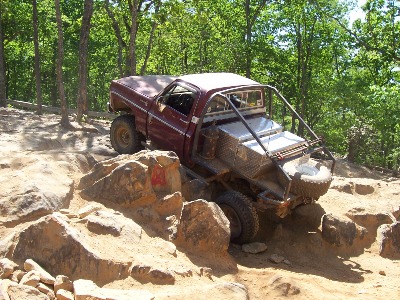 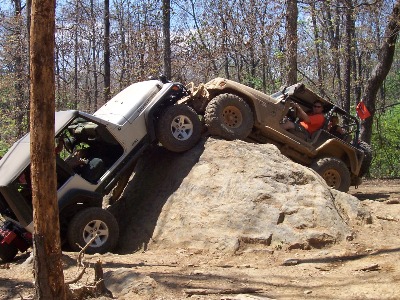 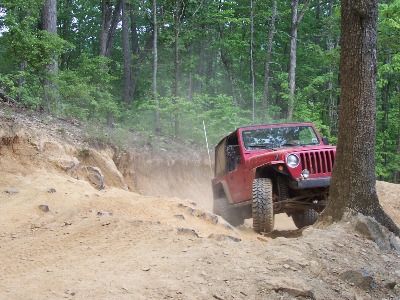