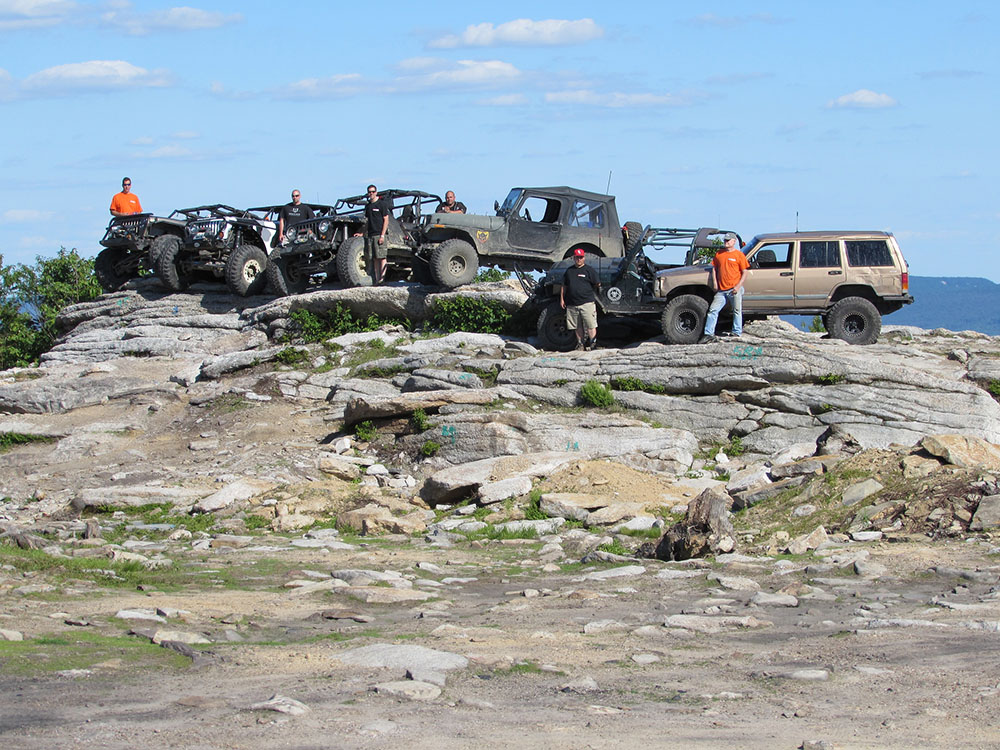 We all headed up to PA early Thursday morning and for once, it seems, we made the trip with no issues along the way. We pulled into the campground around 4:30 or so, set up camp, and relaxed for the night.

Friday morning, we loaded up and headed for the trails at about 8:30. There were only 4 or 5 other rigs in the parking lot so we pretty much had the run of the park to ourselves. We decided to hit trail 20 first so Craig could exorcise some demons from last year. This trail had a good obstacle near the beginning to play on, or bypass, and then the rest of the trail was a very technical, twisty, path through the woods. Craig made it past last year’s heartbreak point where his track bar broke and he dropped the bolt in the muddy creek, never to be found again. When I got to this point, I got hung up and needed a short tug. Ken helped hook up my winch to Ronnie and proceeded to drop the pin to the d-ring in the creek in almost the exact spot Craig lost his bolt last year. After digging around in the water for a few minutes, we sacrificed the d-ring and continued on without the pin. Trail 20 creek 2, CNC bolts 0. About ¾ of the way down the trail, we turned off at an intersection and went to the parking lot for a repair. After a quick lunch, we left the parking lot for the second time that day and headed over to Trail L3. We got to one area that had 3 or 4 cool uphill climbs that were maybe 50 yards long and just kept looping back around to the main trail so everyone could choose which line they wanted to take. Ronnie noticed his front ARB wasn’t engaging so decided to go back to the parking lot and rode with Steve the rest of the day. We then headed down to Stair Steps and then Jotter’s Way. Jotter’s is a flat wide open rock face that is pretty steep and was part of the RCQ King of the Hammer’s qualifying course. Steve went up, then Scott, myself, and Craig. Steve then tried a harder line off to the left that left him sideways high centered on a rock on a 45 degree slope leaving Steve to yell “Hook it up!” He winched his way to the top but not after 3 or 4 impressive attempts. To finish the day we went to CV Trail with 3 separate tricky climbs. Steve, Scott, and Craig all did a new climb off to the far right almost dislodging a volkswagon size rock at the pinnac= le of the climb. Craig also leaned his passenger side into a tree denting the cowl and breaking his radio antenna off. Dan tried the middle line and ended up opting for a winch line. While winching, his driver front tire got wedged under a rock and possibly broke his outer axle shaft. We didn’t notice the break until the following day though so it’s possible it happened at another spot. I tried a third line through a V notch on the far left and after getting about half way in, I lost my transmission due to the steep angle and the fluid being a little low. I winched up to the point I could drive again and eventually made it out. The last trail of the day was Walk in the Park, which definitely was not. This trail had large rocks leading up to a smooth rock face exit. I think we all got hung up at some point but everyone made it out.

On Saturday, we went to the new side of the park across the road, we had never been to these trails before. We started on Trail 31 which was a blue/black. Somehow Steve broke his gas tank after barely getting on the trail. Luckily he was able to get back to the parking lot before it completely drained. While waiting for Scott to return with Steve, Craig, Dan, and I did a hill climb that had a cool vertical drop off at the top. Craig and Dan went around and I talked myself into going over the edge, literally. It was a little unnerving but was a good rush dropping off the cliff. Scott and Steve caught up with us and Steve jumped in my passenger seat for the rest of the day. We winded through the park heading over to Devil’s Den, a large rocky play area with multiple lines. Dan got his money’s worth on the right side, while Scott, Craig and myself<= /span> all chose different lines from one side to the other. Craig snapped a rear shock shaft in his climb which allowed the rear axle to droop out far enough for the spring to fall out. This would haunt him the rest of the day. We headed down the trail to a short hill climb called BFG Hill then Upper and Lower Talisman. Both of the Talisman climbs were red obstacles consisting of steep rocky climbs. Craig started having locker issues, and lost his rear spring once again. Next up is a black trail called Outer Limits. Once again it was another very rocky hill climb with multiple lines. On the way, Craig notices his cb antenna is gone so he goes back to look for it. We wait about 20 minutes for Craig and then Dan notices he is missing a coil spring so he peels off and finds it back at Devil’s Den. The last trail of the weekend is another red trail named Affliction. It starts out with a small ledge at the entrance then a rock garden on the side of a big hill that is a big play area. Scott heads down one side and out of sight. I follow then cross over to the opposite side to go back up the hill. I made a couple runs over the ridge in the rock garden then follow the shorter leg (the trail is a big Y). There was a short steep downhill then 2 small ledges to drop off. On the second ledge a rock the size of my tire crumbles off and races me to the bottom. Meanwhile Scott and Ken get lost and show up again about 30 minutes later. Craig takes a go at Affliction and his spring falls out once again. Coupled with the on again off again locker, we decided we’d had enough. It was about 4:30 so we headed back to the parking lot area, played on the competition course for a few minutes then took the obligatory group picture.

For dinner the last night, we found a nice little restaurant and bar about 4 miles down the road that we never knew existed that was way better than where we used to go. A final campfire and the trip was all but over. The drive home proved uneventful as well with no mechanical issues and we were back home around 5pm.

Carnage report for the weekend: