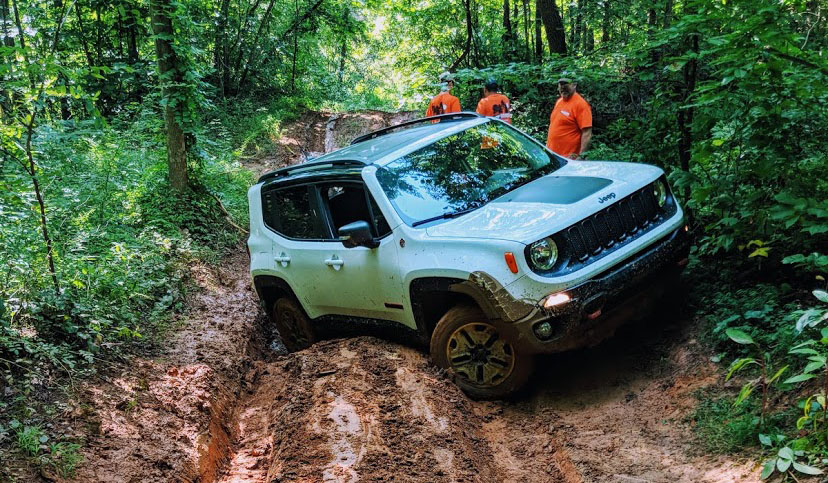 I know that Jesse, Anna, Carl, Ralph and his son, Bob B., Bob T., and Joe and his son arrived on Friday.  They did some wheeling that afternoon and some that evening.  There is at least one video posted from a night ride.

Saturday morning, Gerald, Rod and myself arrived for a day trip.  Ralph was not driving due to brake issues.  Brake lines were leaking on the front.  We went out about 0930 and rode some green and yellow trails.  It is a great little park about 60 acres with a lot of trails.  If it had been completely dry I think about half of it would have been doable by anyone.  But since it had rained during the week there were some muddy areas and in general the soil is pretty loose so many green trails became difficult and everyone pulled cable or had to be assisted at some point Saturday morning.  The front radius arm joint on my jeep came apart again so I parked it for the afternoon when we went back to have lunch.  Also during lunch Ralph and other figured out they had the wrong crush washers on his front brakes and put the correct ones in and got his leak fixed.

Saturday afternoon, Gerald left after lunch.  the rest of us went back out and explored more of the park.  I think we hit every green trail, quite a few yellow and one or two red trails.  Bob T. lost his line to his rear ARB again and was limited on a few obstacles.  We finished up the afternoon playing on a few rock piles near the camping area.  I even got my jeep back out and ran those knowing that I would not do any damage playing on those rocks.

Went back to camp and started preparing dinner with Ralph.  A few went back out and played for another hour or so while we prepped dinner.

Had burgers, hotdogs and fixings for dinner, was a great time with good friends.  Rod left for home right after diner.  I hung out to about 1930 and then headed for home as well.

Those that stayed overnight wheeled a couple hours on Sunday morning as well before heading for home.  From talking with Bob T, both he and Joe did some significant damage to their tierods and had to stop at a rest area and adjust their steering to center their steering wheels to turn off traction control warnings.  Having seen Bob T’s tierod he will be getting something to replace it, it was bent in a half moon at least 3 in out of alignment.

I think this could become an annual pilgrimage.  It is a great little park with lots to offer that is close to Raleigh area.  It can offer something for everyone from mild trail riding to pretty challenging obstacles.  Most if not all of the obstacles can be easily bypassed and groups can split and rejoin as part of the group goes crazy and the other part bypasses.

We did have a winch incident.  Trying to pull my WJ over an obstacle that no one else could make it over either we hooked my winch to a tree.  Proceed to try and bend the tree in half.  Then hooked it to a jeep that was tied off to another jeep.  Went through a snatch block to get more power.  Started winching and the snatch block actually broke.  I have synthetic line and it dropped almost straight to the ground.  No one hurt from the recoil.  Glad it was not steel as I might have had a line into my windshield.  It is worth mentioning we were all following good winching rules.  Everyone was clear and one person was providing winch commands to me.  Great learning moment.

On a side note I think it was a Smittybilt snatch block that broke, not sure how old or what 4WP might say about it.  Not sure what it was rated at either.  With it doubled I was probably pulling about 24k lbs of force as I have a 12k winch in my WJ.  I was in my truck so not sure what the rating on the block was but it looks like they are less than what I was pulling so we probably overloaded it.  One thing I learned was that I will not let someone else put winch accessories on a pull I am involved with without verifying the condition and ratings of said accessories.

Pictures and videos are posted take a look at what you missed: 2018 July The Flats