The trip started off at a Flying J parking lot in Burlington NC. The group met up fueled up and hit the road at 930am. At noon, we stopped in Wytheville for lunch and a top off. We also met up with Lee and his son Steve. It was a great day for a drive nice weather and great AC to keep the heat down. We arrived in Harlan around 3:30pm at PoWhiteBoy’s cabin rentals. James White was the owner/operator, we met him and settled up on the rent for the weekend. We unloaded and hit up the welcome center to get a trail pass. We had a culinary adventure for dinner. Carl whipped up a batch of his county famous chili and I had made some dip/sauce simply called green stuff. Between the heat of the green stuff and the chili it was a great meal. While cleaning up we devised a plan to go trail riding. We would go up trail 10 to 11 to 12 hit up lower rock garden, back on 12 to 20 then to 10 and home. It was a genius plan poor execution. When we pulled onto trail 11 John Ridge had issues with his transfer case he and Carl took it home and came back. About a mile into 11 and Randal has developed a loud clunking sound from the front diff. We finish off 11 back to 12 we played on lower rock garden and headed home. We sat by the fire and told our best lies .

Friday… We put some miles in. The goal was to do Mason Jar and find cliff hanger. We took the long way around to Mason Jar (12 to 25 to 12 to 31 to 29 to 27 to mason jar). Mason Jar is listed as a truck only class 5, but we tried it anyways. Since I was the first in line I tried the bonus line and was denied which turned into an interesting exit. The bonus line is dropping off one large rock and climbing the next rock that is only 3 feet away. I didn’t have the approach angle to make it happen. We decided that turning left and then right around the rock was a good idea. It turned into a 37 point turn and a tow strap holding me from going over. At this point Dana and his group had met up with us just in time to watch Ronnie start the trail. He opted out of the bonus line (smart man) and cake walked the entrance and a pinch point near those big rocks. Dave was next, and with some finesse he was able to make the entrance and past the tree. Lee is next and makes short work of it as well. At this point I move forward to the next section to make more room. It was an uphill line with a ledge in the middle not terribly difficult but still fun. Ronnie and Dave made it no problem but Lee had some issues and had to pull cable to get on the right line. Steve and Carl had caught up and Dana and his group were making their way up, and we decided it was about lunch time. After lunch was another ledge to climb the far right was 6’ and the far left was 2’. Ronnie took the far right line and did a great job making the climb. Everyone else did either the far left line or the middle line. From there it was just trail riding out to #12. From there we wanted to do Cliffhanger. We hopped on 12 to 31 got lost had to turn around found 36 over to cliffhanger. Why this is listed as a tuck class 4 is beyond me, it was a blue trail at best. You basically follow a ridge line down if there wasn’t as much foliage there would be great views. We started back on #38 and that’s the trail that Ronnie almost ran off of. Twice. 38 to 29 we stopped at 4 poles to repair my exhaust, one of the hangers failed. We admired the graffiti that tootles (pronounced toot-les) had installed on the rocks around 4 poles. He was proclaiming his love of someone, I’m sure they have broken up by now when you write their name on a rock, it never works out. It was back to the house for more green stuff, burgers, and brats. We repeated the same lie around the camp fire as the previous night.

Saturday… the last day of wheelin… We started at Rail bed. I did the water fall, Ronnie took the bypass and the rest met us at the exit. Next trail was fish fossil. This trail reminded me of welder at Calalente, it followed a stream up hill. It was lots of small rocks to navigate and it was just wider than a vehicle. We all made it, but carl picked up some trash in the bead of his rear tire. We stopped to swap in his spare met up the group at the start of lil jagger. We passed on little jagger and went to lower rock garden then to lions den. Lions den has changed since the last time I was there. It was dug out more than I thought it would have been. I had to winch 3 separate times. Lions den is a short hard trail that dodges these massive boulders and has a pinch point between a large rock and tree. The entrance is a rocky hill climb that required me to winch 2’. The next section is a downhill ledge next to a very large rock. The trail then makes a right to the pinch point. I had trouble lining up to the rock and tree that we pulled cable to pull the front around. One of my speaker pods lost the battle with a rock in the process. As im getting lined up I see this kid being carried away by his folks crying, I thought man I would cry too if my folks were taking me away from watching some idiot on the trail too. Over the rock leaning on the tree, the trail turns left 90 degrees and its another pinch point between these 2 large rocks. I kept hanging up on the rear diff so out came the cable to get my past the hang up. The last section consists of three large rocks that you have to drive over to the exit. You climb up on the first stay right to the second. Now things get interesting. You start to go left drop down 4’. As soon the back is starting to come down you have to turn right and climb the last rock that is catty corner to the direction of travel. Hug the tree that’s there and just crawl it. The front pops up and then the rear and its done. Back to that crying kid… just as I hop out of the car I hear the mother say to him “see I told you he is ok”. It seems he thought I was somehow hurt while positioning to the rock / tree pinch point. I talked to them for a moment. At this point Ronnie didn’t want to try it so we left to the middle rock garden. We took 31 over to 36 then 20, 12, 25, 12and finally trail C. We did Grape vine and Ronnie did the middle rock garden trail right as the bottom fell out. It rained fairly hard. We decided to book it over to the right side of the map since we haven’t been there much. So 12 to 10 as far as it would go. We ended up at white tail campground. We looked at white tail crawl but no one wanted to do it, so on to Buds bypass. Buds Bypass started off as a nice trail but there was a section that a bad idea so we turned around and went up white tail crawl. The group split Ronnie and I went up the rocky way the rest did a hill climb out. That was all the riding we had for the day, back to the Evarts Hilton for more lies and dinner. We did stop at the Dairy Hut for a milk shake. Their menu had a curious item, it was a sandwich simply called piece of meat. I dunno what a piece of meat sandwich is and I wasn’t curious to spend money to figure out what it was. John Ridge cooked up the rest of the burgers and brats and we had a great fire.

Sunday we cleaned up, loaded up and hit the bricks. Another fine day to be on the highway, no rain, great AC, what more could you ask for? We stopped for lunch and noticed one of Ronnie’s trailer tires were low. Added some air and off we went. We stopped at a rest stop just past the NC boarder and he was still losing air. We swapped tires and in the process found the leak and plugged it. No other issues, although we came up on a fresh accident at the 40/85 split involving 6 car, Im glad we didn’t get tangled in that mess. Trip carnage: Randal unknown clunking from the front end. John Ridge has shifter linkage issues. John H lost a speaker pod and had to stop to fix the exhaust twice. Lee and Steve messed up their corner markers.

This was another great trip. Harlan has lots to offer everyone. We put about 50 miles of trail riding in most of which were green and blue trails. It’s a big place so there are plenty of moderate trails that we didn’t do. The accommodations were great Mr. White was great to work with and I would rent from him again. 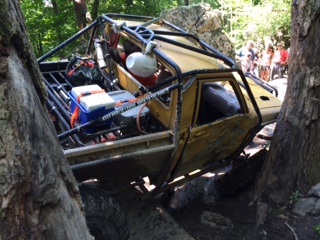 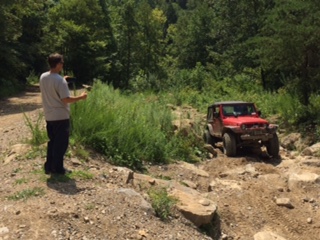