First I want to thank everyone who came out and assisted with the Neuse River Clean-Up this year. Mike Feltman, Carl Barclay, Carl’s Dad and Niece, Ron Watson, Rob Breault, Jack Ridge and Brian Nichols and his entire family. Through everyone’s efforts we were able to remove quite a bit of trash from the Neuse River.

The morning started at around 9am as everyone arrived at the Anderson Point Park lower parking lot. The day was bright and sunny, although a little bit warm and humid. Once we had all arrived and assembled we broke up into two groups. Mike, Rob and Ron headed out to walk the Greenway starting from Anderson Point Park and Carl and crew, Brian and family, and Jack and myself headed over to the Milburnie Dam launch point.

Upon arriving at the Milburnie Dam launch point Jack and I started unloading our two man kayak while Carl and crew unloaded their canoe and Brian and family began the process of inflating their flotilla of tubes. Once everyone was unloaded, inflated, and hauled down to the river we launched at around 9:40. Carl, Dad, and Niece in their canoe (with a tube in tow behind as a garbage barge) took the right side of the river. Jack and I took the right side of the river and Brian and family worked both sides of the river I believe.

I wish I’d gotten a picture of Brian and his family’s tub setup. It was quite impressive and made use of a separate rectangular tub to carry a cooler (or whatever you wanted) and included a stereo with speakers. I quickly got the impression they had done this tubing thing quite a few times before.

We weren’t 300 feet from the launch point when we hit our first treasure trove of trash. Brian had walked up along the shore and had found a trail that was heavily used and practically filled an entire trash bag in that one location. He discovered what appeared to be a hobo hole filled with bottle, cans, and trash and was then covered over. He cleaned out the hole and transferred the bag to Jack and I. I handed him a fresh bag and he headed back up the river (walking and swimming) to catch up with his family.

The group continued working our way down the Neuse like this for the rest of the morning. Trash and debris seemed to be found in bunches. There would be nothing for a bit and then you would find a pile of it, usually in places where it appeared folks had been fishing. Some items were within easy grasp on the river and others required getting out and climbing the muddy banks or climbing over logs to get to it. We found all kinds of things. Lots of bottles and cans of course, but also shoes and flip flops, milk jugs, expanding foam, lots of fishing nets, fishing line, a dodge ball, a soccer ball, several baseball, tennis balls and other items. Carl found a bucket and I believe the guys walking the Greenway found a tire tread.

We made it back to the Anderson Point Park take out point around 12:45pm where Mike, Rob and Ron were waiting for us. Everyone made it back safe without injury or incident, although I did somehow lose my sunglasses in the river. We pulled everything out of the river and Mike Feltman drove Carl, Brian and I back to the launch point at Milburnie Dam to pickup our vehicles and then Mike and Rob left for the 4WP event. Carl, Brian and I drove back to Anderson Point Park, collected our boats and tubes and piled up the trash where it could be picked up. Brian and family then bode us farewell and Carl and crew, Jack and I headed to El Senor where we enjoy a very satisfying lunch. The day ended around 2pm after lunch. 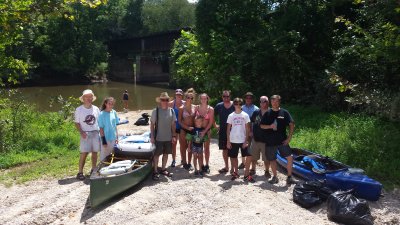 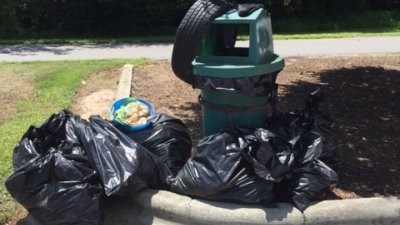