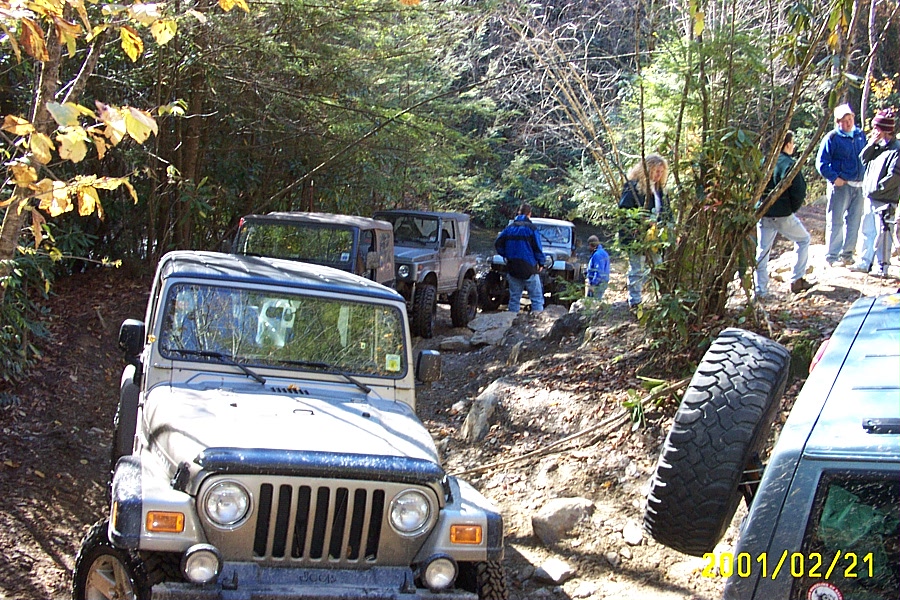 Friday started out at 9:00 at the Trail Head/ Pay Post. The following people were in attendance:

We rolled out 9:30 and headed for Trail 4. Usually Trail 4 is a nice warm up, but nothing much for excitement. It was very wet for us and our first obstacle was a mud pit with a large rock on the left side waiting for some fresh paint. Our only concern was the Rubicon. Everyone else had rocker guards or did not care about body damage. It took a little coaxing but with dual lockers and a good driver we got Craig through without a scratch. We wanted to try Guardrail because we had a small group and figured it would be easier with less people.

It took a while just to get to the foot of Guardrail. Lots of winching and tow strapping got us to the obstacle though. At one point Craig’s back driver-side tire was about to fall off the mountain. We hooked up Ken’s Cherokee to pull the Rubicon forward. But before we pulled him up the mountain, I decided that it would be a good idea to hook a strap to the back of the Rubicon and run it perpendicular to the jeep up to a tree. As soon as Ken pulled Craig forward the tire slipped off the trail, luckily the strap connected to the rear end tightened up real quick and kept the Jeep (and Craig) from falling down the mountain. Talk about a close call. Everyone had to winch up Guardrail. It was really wet and nasty. The embankment decided to leap out and hit my front passenger-side fender. It was nothing bad though. After we got half of the group up, we ate lunch. When we finally got the last one up, we had spent four hours on Guardrail. Talk about a long day.

We headed up the trail to Helicopter Pad. We all took the by-pass and then proceeded to walk back down to take a look at the pad. It has very steep rocks with lots of dig outs and a huge rock protruding from the left-side just waiting for a quarter panel or worse a rear window. After a couple minutes of gawking we got back in our jeeps and started to head home. Everyone is tired at this time.

We had two choices to get back home; going down School bus or going down the Squeeze on Trail 11. We decided to take on the Squeeze. We felt that it would be quicker because it had only one hard obstacle. Rocker-guards are almost a necessity for this obstacle. I made it through testing using my rocker-guards all the way through. Next, came the Rubicon. Myself along with Ken and J.D. guided Craig through the squeeze very slowly. At one point we had to use the High Lift jack to put a couple of rocks under the front tire. After all was said and done, the only damage was a little scrape of his rear plastic fender flair, nothing a little Armour All can’t take care of. Ken made it through using his rockers. J.D. in the Samurai made it look easy. Jim in the YJ pretty much ran over the Squeeze with his wide axles. The rest of that trail was nice and mellow.

We took Trail 11 to Trail 3 and then we hit Trail 4. At this time the group split up. Ken, Craig, and myself went to Fain’s Ford. Jim and J.D. along with their wives, headed back home. The ledge to get out of the creek is steep; we had to stack a couple of rocks so that the Rubicon could get up. At this time we met up with Rick Morris and Frank. We chatted for several minutes and then decided it was time to go home. The way out was easy going until we got to this mud pit with a huge rock in the middle of it. This is the same obstacle that earlier in the day we had to guide Craig through. Somehow, the rock was moved from the side to the middle of the mud pit. It took a little bit of time and some patience but everyone got through under their own power. At this time it was around 7:30. Everyone had different plans so we headed on our way. The plan was to meet the next day at 9:00 at the pay post.

Saturday morning 9:00am we all met at the pay post with one extra club member, John Harper, he has a TJ on 33” Super Swampers. We were expecting Frank, Rick Morris, and Michael Care, so we decided to wait until 10:00am and then head out. At 10:00am we headed out without them.

We drove down Trail 1 until it hit Trail 5. At this point the trail crosses the creek. The water was only about 6” deep. We headed on up the trail until the Rubicon got hung up on its transfercase. We hooked up Ken’s Cherokee and pulled Craig over the rough spot.

Then, we hopped on Trail 4 heading towards Fain’s Ford. Everyone made it up the ledge this time. We were slowly making our way to Slick Rock. We hoped on Trail 8 and then on Trail 9.

Trail 9 has been washed out more than in past years and there was a huge off-camber mud pit that swallowed even the biggest tires. Everyone made it through except the Rubicon. Craig bottomed out about ¾’s of the way through. His exhaust tip was under the mud so we had him keep the RPM’s up so that the engine would not die. Ken came to the rescue once more and pulled Craig out.

Now it is time for Slick Rock. It took several attempts. Backing up and bumping it a couple times, but I made it up under my own power. Next, was Ken, he was doing great until he got to one obstacle that did not like the Cherokee’s wheelbase. Each tire was trying to climb a different ledge at the same time. A little help from his winch got him up. John Harper was able to get up the rock with no excitement. Come on John, at least put a tire in the air for us. Craig was able to get up to Slick Rock after a couple tries and a bent tailpipe we decided to winch. John ran a snatch block down to Craig to help him out. Jim Nelson was next. He put on a show. His tires were jumping all over the place. A couple of tries and he was up the rock. J.D. was last and was trying to compete for the best show competition. His driver-side Super Swamper decided that it was going to climb the straight up the mud wall on the left. The Samurai stood almost straight up. After J.D. put his heart back into chest, Jim winch the Samurai up the rock.

Everybody knows that once you get up Slick Rock it is not over. There are a couple more obstacle that await you. The Rubicon needed a little help; John helped him out this time. Once we all got to the top. We noticed gear oil on the rock behind Jim’s wrangler. It wasn’t good. The oil was dripping from the axle tube. Upon further inspection we discovered that his ladder bar had actually ripped open the axle tube at the welds. (Jim your welds are too strong, jk) We tried to weld up the hole with welding rods and batteries but it did not work. To get Jim home, we disconnected the ladder bar and drive shaft. We slowly made our way out of the park. Jim had to be helped on a couple of obstacles because he only had front wheel drive.

We got out of the park at 9:00pm. Time to eat. We went to the steak house but they were going to close soon. So, we headed down to the Mexican restaurant. Everybody had a great time. Can’t beat grubbing and telling stories after a long day of wheeling. It was really great getting to know the individuals on this trip. I believe that everyone had a good time and everyone got home ok. (Jim had a trailer) I can’t wait to do it again next year.

I will have to say that Daimler Chrysler did great job on the Rubicon. We did have to pull Craig a couple of times. But for a jeep off the show room floor, it did awesome. We got him up Guardrail and Slick Rock with only a bent tail pipe, scraped plastic fender flair and a bent license plate. I can’t imagine what this vehicle will be capable of with a little more clearance under the transfercase.

Let’s do it again,
Scott Roberts 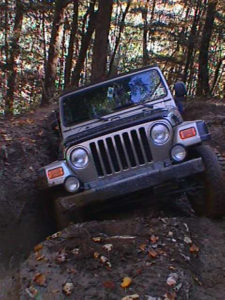 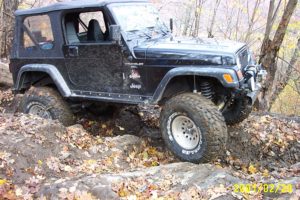 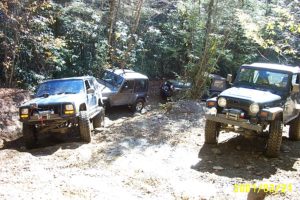 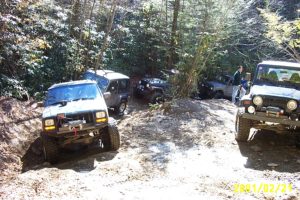 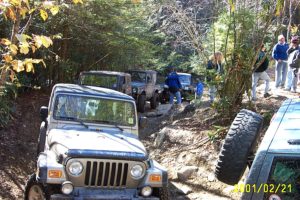 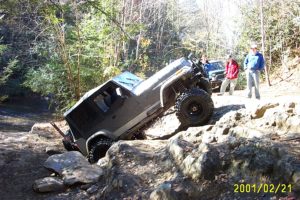 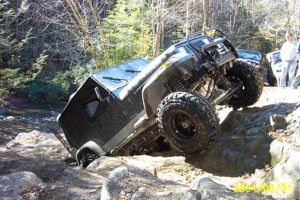 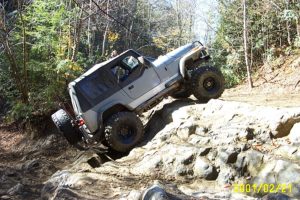 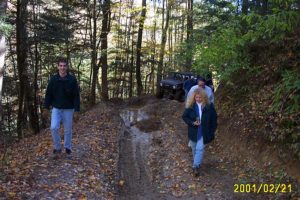 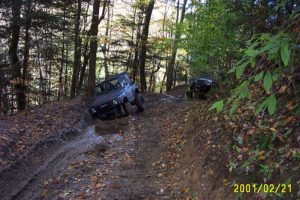 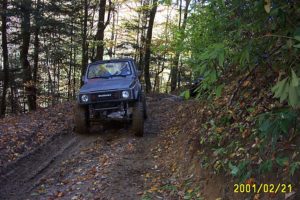 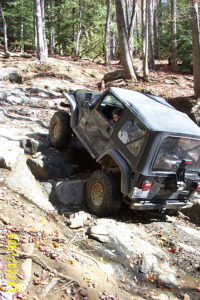 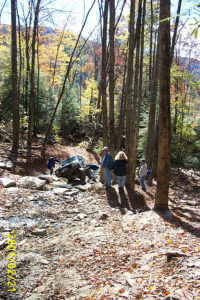 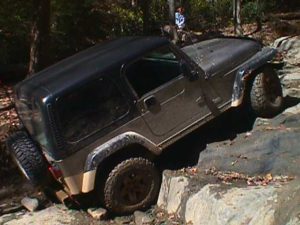 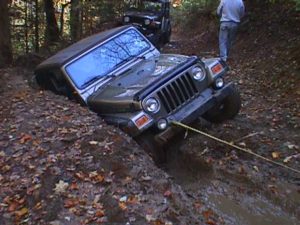 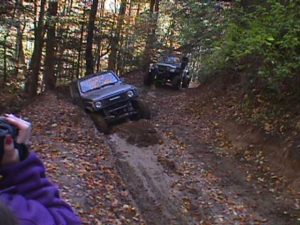 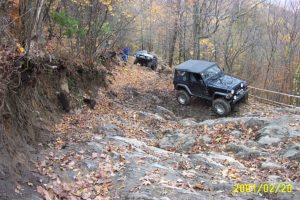 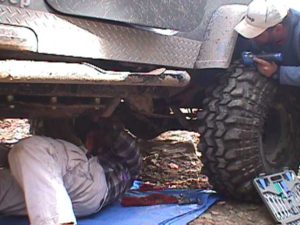