Advanced Group
Scott
Ken
Ronnie
Jack & Jack
First day we headed up Pinball, to Rail Bed, to Cream Puff. Navigating our way up Rail bed in the rain while a stream ran down the trail was the most fun I have had on a trail in a while. Next came the Intimidator. This trail has a couple steep muddy inclines. Wheel speed and momentum are key. Everyone made it up. Ken needed a little assistance from his winch.

Next up was Middle Rock Garden. This trail did not disapoint. This is the one that I flipped back on my hood several years ago. So, I had a couple flashbacks when we got towards the top of the trail. Given that the trail was still wet from the rain earlier- I think everyone had to winch at some point. Jack said this was the first time he had used his new winch… he went wheeling for 2 months in Colorado and never needed it. Took a trip to Kentucky to need his winch- that is why we go to Harlan!

We attempted Bruiser- my rig fell into a deep hole that was in the middle of the trail. It would have taken a lot of winching to get everyone through. So, we decided to back up.

We decided to hop on 20 and run over to Hell’s Revenge. Again, in the drizzle rain this trail was very interesting. Tight and technical. It got to a point where it was a 6 foot vertical wall with a tree across the trail. I decided to back down the trail. It would have been a lot of work to get everyone through on this wet day. Back on 20- it started to down pour. We decided to just stop and let the rain go by. After about 20 minutes or so we headed to meet up with the other part of our group for lunch. We found them and took about a 30 minute break to catchup on what each group had been through. It sounds likke the rain gave everyone a hard time.

After lunch, our group headed down 20 to 22 to TROUBLE. We knew this was a Red trail but did not know much else- what we found was a wet steep downhill run. We decided we were not interested so we headed on over to 10 to get on White Tail Crawl. This trail was awesome. I think everyone had a good time…at least for a while. Jack’s driveshaft came apart on one of the rocky sections. Luckily, there was an exit nearby. Ken, took another bypass and pulled Jack out to the main trail. There were a couple hills inbetween but everyone got Jack out safely. About this time, Jack needed to head back to Camp and I think Ken had enough (this was his 4th day of wheeling in a row). Ronnie and I wanted some more so we hit trail 5. Lots of steep hill climbs. Had some fun but just as we about got to the end…several huge trees were across the trail. So, we turned around and made quick work to get back off the trails. It was time for a milkshake!! So, to the Dairy Hut we went.

Day two we did a portion of the Rock Garden, Upper Rock Garden and made our way over to Lion’s Den. We had the entire group so it took us a little longer than usual. Everyone made it to see myself and Ken take our rigs through Lion’s Den. This is one of those trails that it is probably best if you don’t get out and look at the trail first. Ignorance is bliss sometimes. I have been through this trail 5 or so times and everytime I am amazed by the dropin, the squeeze and the exit. Still not sure how any rigs get through there- amazed everytime. It is defitinitley on my top 5 trails of all time. It never disappoints. Ken and I both made it through.

After Lion’s Den our crew made its way down to the beginning of Mason Jar. This area has a great overlook that has a spectacular view and makes for some good pictures. We decided to eat lunch here as well.

After lunch, myself, Ronnie and Jack made our way up Mason Jar. This is another great trail that changes just enough everytime you go to keep it interesting. The three of use made it through the trail in good time. We actually met up with the rest of the group at the end of the trail that was going back around. At this time, myself, Ronnie and Ken had enough and did the trails that we wanted to – so we decided to head home.

Another great trip in the books…

Well it was an interesting trip. A lot of fun wheeling and good times around fire. Anna is a great driver. Put a locked jeep with 35s and she could go anywhere.

Now to the carnage. I hurt my tow rig on the drive up. It is behind a wrecker coming home. See pic below. On Thursday Jessie broke the cv on a new drive shaft. Cannabalized my spare to get him going. Held up great.

Headed out Sunday with my rig behind a wrecker riding with Bob. Passed the group where they were putting Jessie’ s jeep on Ron’s trailer because it was running bad. Just talked to Anna and about 20 minutes after that Carl blew a rear tire in his truck. Had to change it out.

What a trip. Will be memorable. It was fun for me but expensive.

Pictures of the Trip 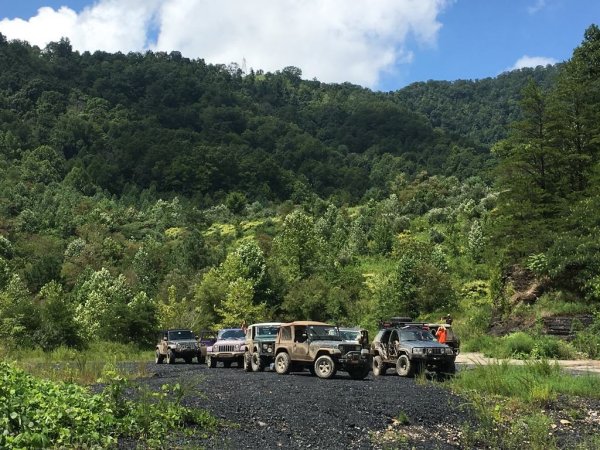